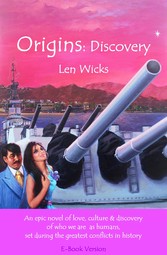 Origins: Discovery - A Story of Human Courage and Our Beginnings

Origins: Discovery - A Story of Human Courage and Our Beginnings

'Origins: Discovery' is an epic story set during the greatest conflict in history. The entire book is written in three Parts, including Part 1: The Axis Rises, Part 2: Defending the Free World, and Part 3: Discovering Humanity. The story starts in 1930 during Soviet Communist times, exploring the challenges of life in the Armenian village of Areni. One of the villagers doesn't know she has a secret within her of monumental significance. In 1937, a single decision changes the past that we know today - an alternative history. The Axis Powers are victorious in World War II, but it creates a common bond among people who would otherwise be foes. Peoples of different ethnicities fight shoulder to shoulder resisting occupation, and unlikely coalitions are formed. Small nations ironically provide sanctuary for the leaders of more powerful countries. Five individuals, from small nations or remote communities, each play a key part in bringing the tale to its conclusion, although one pays the ultimate sacrifice. The seeds are sown for yet another global war, although the conflict and human courage are only a background to one of the most important discoveries in human history. Two threads in the story intertwine. One thread involves the conflict itself and the development of increasingly advanced technology such as nuclear weapons. The second thread involves the Origins project, which reveals a great secret about human beings. This provides a mirror to human consciousness that ultimately plays a crucial role in the fall of the Axis. The world has changed forever; as has the way in which people understand their humanity.