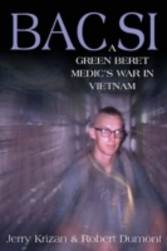 During the Vietnam War, U.S. Army Special Forces A-Teams were deployed to isolated outposts or ",camps", in the remote areas of South Vietnam. Their job was to recruit, train, and house members of the indigenous population while molding them into combat-ready fighting units. A-Teams consisted of up to 12 Green Beret soldiers who were experts in both combat and their individual military specialties. The role of the indigenous units, in conjunction with their American advisors, was to provide border security, counter the Viet Cong insurgency in the countryside, provide intelligence on enemy troop-strength and activities, and when necessary engage elements of the invading North Vietnamese Army. Bac Si (the Vietnamese term for ",medic",) is the story of Sgt. Jerry Krizan who was assigned to Special Forces Camp A-331 in the III Corps tactical zone, only 10 miles from the Cambodian border. Because of its proximity to a major north-south NVA infiltration route, there were constant enemy troop movements through the camp's area of operations and A-331 itself came under attack on more than one occasion. The author meantime needed to accompany patrols and probes into enemy territory, not only prepared to provide aid but fight as a soldier if the squad was ambushed, or itself chose to attack. In this small-unit warfare against an expert enemy, U.S. soldiers had to survive as best they could, with their only succor a Huey, and meantime on the ground by themselves against unknown opposition.Our Green Beret base camps were our very first line of defense along the borders of South Vietnam, and in this book, through the eyes of a medic, we learn how dire, and confusing, a role we asked our Special Forces to play during that era.