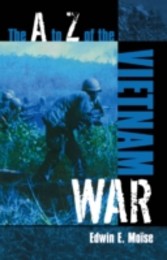 A to Z of the Vietnam War

A to Z of the Vietnam War

The Vietnam War is anything but a forgotten war. Even today, the strategies that led to an unexpected American defeat are hotly debated, and much remains controversial and unclear, which is not surprising given the nature of the combat in which the Vietnamese guerrilla warfare eventually won out over high-tech weaponry.The task of clarifying the issues without oversimplifying this complex war that impacted the world is undertaken by The A to Z of the Vietnam War: first in its chronology, then in its introduction, but mainly in a substantial dictionary section including hundreds of entries on significant persons (military and political), places, events, armed units, battles and lesser engagements, and weapons. And for those seeking further information, an extensive bibliography is included.