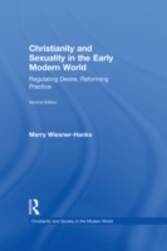 The book surveys the ways in which Christian ideas and institutions shaped sexual norms and conduct from the time of Luther and Columbus to that of Thomas Jefferson. It is global in scope and geographic in organization, with chapters on Protestant, Catholic, and Orthodox Europe, Latin America, Africa and Asia, and North America. All the key topics are covered, including marriage and divorce, fornication and illegitimacy, clerical sexuality, same-sex relations, witchcraft and love magic, moral crimes, and inter-racial relationships. Each chapter in this second edition has been fully updated to reflect new scholarship, with expanded coverage of many of the key issues, particularly in areas outside of Europe. Other updates include extra analysis of the religious ideas and activities of ordinary people in Europe, and new material on the colonial world. The book sets its findings within the context of many historical fields- the history of sexuality and the body, women's history, legal and religious history, queer theory, and colonial studies- and provides readers with an introduction to key theoretical and methodological issues in each of these areas. Each chapter includes an extensive section on further reading, surveying and commenting on the newest English-language secondary literature.