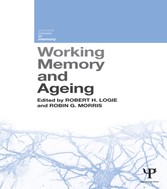 The rapid growth in the numbers of older people worldwide has led to an equally rapid growth in research on the changes across age in cognitive function, including the processes of moment to moment cognition known as working memory. This book brings together international research leaders who address major questions about how age affects working memory: Why is working memory function much better preserved in some people than others? In all healthy adults, which aspects of working memory are retained in later years and which aspects start declining in early adulthood? Can cognitive training help slow cognitive decline with age? How are changes in brain structures, connectivity and activation patterns related to important changes in working memory function?Impairments of cognition, and particularly of working memory, can be major barriers to independent living. The chapters of this book dispel some popular myths about cognitive ageing, while presenting the state of the science on how and why working memory functions as it does throughout the adult lifespan.Working Memory and Aging is the first volume to provide an overview of the burgeoning literature on changes in working memory function across healthy and pathological ageing, and it will be of great interest to advanced undergraduates, postgraduates and researchers in psychology and related subject areas concerned with the effects of human ageing, including several areas of medicine.