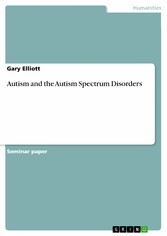 Autism and the Autism Spectrum Disorders

Autism and the Autism Spectrum Disorders

Seminar paper from the year 2010 in the subject Psychology - Diagnostics, Atlantic International University, language: English, abstract: The general meaning of the term 'autism' stems from the root words: aut meaning 'self' and ism meaning 'orientation or state'. The overriding tendency is to be absorbed with oneself. The child's thoughts, feelings and desires are governed by his internal apprehensions of the world. The internal is not consonant with the world of reality, giving the notion of pathology, wherein the individual sees things in the form of fantasy or dreams, wishes or hopes, instead of in terms of the reality that is common to others around him (Reber & Reber, 2001). In Berk (2000), autism is explained as impairment in emotional and gestural (nonverbal) behaviours that are required for successful social interactions. The language is delayed and stereotyped, with some autistic children not speaking at all. Autism is believed to be highly heritable; in the world of the autistic, words such as 'believe', 'think', 'know' and 'pretend' are seldom part of their vocabulary (Happe, 1995). While autistic disorders probably do not have a single cause (Rutter, 1978; Sue, Sue & Sue, 1997), variations of autism (autism spectrum disorders) has been suggested to be the result of neurodevelopmental anomalies in white-matter development (Ellis & Gunter, 1999). Autism Spectrum Disorder (ASD) is a broad category of conditions that share similar symptoms; it is often referred to as pervasive developmental disorder (PDD) (Tilton, 2004).