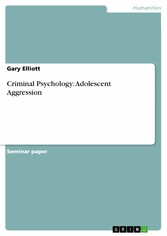 Seminar paper from the year 2013 in the subject Psychology - Forensic Psychology, Penal System, Atlantic International University, language: English, abstract: In the course of this paper we will deal with adolescent aggression. At the outset, the manner in which teenagers deal with their anger will be discussed. The progression from feelings of anger to displays of anger and aggression will be covered. We highlight the causes of adolescent anger, included here are triggers of aggression and the signs for parents to be aware of. Risk factors for aggressive behaviour among teenagers are outlined and the parallel between male and female displays of aggression are discussed. The manifestation of aggression has differences for boys and girls and concepts such as physical and verbal aggression are covered. The presence of both direct and passive aggression with relevance to sex differences is important to the content of this paper. The potential for the development of oppositional defiant disorder and conduct disorder are also covered. Guidelines for parents with children who manifest aggressive behaviour will conclude the paper. Aggression is a serious problem Aggressive behaviour of teenagers takes a number of forms; these include but are not limited to physical aggression, verbal aggression and indirect aggression. Physical aggression includes actions such as hitting, pushing, kicking, punching and hair-pulling but often escalates into stabbings, shootings and rape. Verbal aggression in contrast, includes intimidating type actions, threatening peers, displays of teasing, name-calling and taunting. The intention to harm another person constitutes aggression, but aggressive behaviour is often not as direct - indirect aggression is equally as harmful and includes actions such as the creation of rumours, gossiping about a peer and the deliberate exclusion of a peer from a group setting or the encouraging of exclusive behaviour among teens. The display of aggression is fairly common among younger children but becomes more dangerous as the child moves into his teenage years and young adulthood. Statistics from research conducted with teenagers, indicates that around twenty percent of teenagers had been bullied during the past year. Up to thirty-three percent indicated that they had been involved in a physical fight and shockingly, thirty-two percent of females and forty percent of males had been involved in a serious violent act such as aggravated assault, robbery and even rape by the age of seventeen...