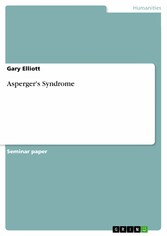 Seminar paper from the year 2010 in the subject Psychology - Clinic and Health Psychology, Abnormal Psychology, Atlantic International University, language: English, abstract: Asperger's syndrome has only recently been accepted as a diagnosis on the autism spectrum even though it was first defined some sixty years ago. Asperger's syndrome is a disorder characterized by some of the features of autism, such as abnormalities of social interaction and repetitive and stereotyped interests and activities, but without the delay of retardation and cognitive development that is seen in true autism (Reber & Reber, 2001). This syndrome is very similar to that of autism, but the normal development of both speech and motor skills distinguish it from autism (Tilton, 2004). The syndrome is also marked by poor arithmetic skills, an impaired sense of humour and difficulty in comprehending the gestures of people around them. Barlow & Durand (2005) indicate that the child with Asperger's syndrome usually has an average IQ, with relatively little cognitive impairment; and imply that Asperger's is not a separate disorder from autism. This idea is supported by Reber & Reber (2001), who also note that some authorities still have doubts as to the validity of the syndrome as a separate disorder to autism. Dr Miriam Stoppard (2006) suggests that people with Asperger's syndrome are often highly intelligent but are perceived to be socially 'a bit odd'. She places this disorder at the higher-functioning end of the autism spectrum of disorders. Dr. Hans Asperger was the first physician to document Asperger's syndrome in 1944. He was involved in studying children, mostly boys, who were having difficulty interacting in socially acceptable ways. The children appeared to be self-centered, socially isolated, less physically adept than others and rather uncoordinated. The children were displaying repetitive physical activities and showed a bizarre fascination with numbers, timetables and the working mechanisms of objects. He did so at the same time that Dr. Leo Kanner, a psychiatrist at the Johns Hopkins University was involved in writing about autism. Dr. Kanner was first to use the word 'autism' which derived from the Greek autos meaning 'self'. Interestingly, both physicians came to the same conclusions, without collaboration, at a time when autism spectrum disorders had not even been officially identified. As a result, European physicians ...