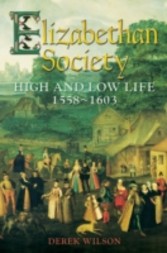 The reign of Queen Elizabeth I (1558-1603) marked a golden age in English history. There was a musical and literary renaissance, most famously and enduringly in the form of the plays of Shakespeare (2014 marks the 450th anniversary of Shakespeare's birth), and it was a period of international expansion and naval triumph over the Spanish. It was also a period of internal peace following the violent upheaval of the Protestant reformation. Wilson skilfully interweaves the personal histories of a representative selection of twenty or so figures - including Nicholas Bacon, the Statesman, Bess of Hardwick, the Landowner, Thomas Gresham, 'the Financier', John Caius, 'the Doctor', John Norreys, 'the Soldier', and Nicholas Jennings, 'the Professional Criminal' - with the major themes of the period to create a vivid and compelling account of life in England in the late sixteenth century. This is emphatically not yet another book about what everyday life was like during the Elizabethan Age. There are already plenty of studies about what the Elizabethans wore, what they ate, what houses they lived in, and so on. This is a book about Elizabethan society - people, rather than things. How did the subjects of Queen Elizabeth I cope with the world in which they had been placed? What did they believe? What did they think? What did they feel? How did they react towards one another? What, indeed, did they understand by the word 'society'? What did they expect from it? What were they prepared to contribute towards it? Some were intent on preserving it as it was, others were eager to change it. For the majority, life was a daily struggle for survival against poverty, hunger, disease and injustice. Patronage was the glue that held a strictly hierarchical society together. Parliament represented only the interests of the landed class and the urban rich, which was why the government's greatest fear was a popular rebellion. Laws were harsh, largely to deter people getting together to discuss their grievances. Laws kept people in one place, and enforced attendance in parish churches. In getting to grips with this strange world - simultaneously drab and colourful, static and expansive, traditionalist and 'modern' - Wilson explores the lives of individual men and women from all levels of sixteenth-century life to give us a vivid feel for what Elizabethan society really was.Praise for the author:Masterly. [Wilson] has a deep understanding of characters reaching out across the centuries. Sunday Times Scores highly in thoroughness, clarity and human sympathy. Sunday TelegraphThis masterly biography breaks new ground. Choice MagazineHis book is stimulating and authoritative. Sunday TimesBrilliant, endlessly readable ... vivid, immediate history, accurate, complex and tinged with personality. Sunday Herald