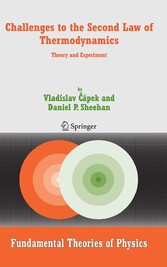 Challenges to The Second Law of Thermodynamics - Theory and Experiment

Challenges to The Second Law of Thermodynamics - Theory and Experiment

An overview of second law challenges and their resolutions is given for the period 1870-1980, beginning with Maxwell’s demon. Classical second law inviolability proofs are critiqued and from these, candidate regimes are inferred for modern challenges.

2.1 Maxwell’s Demon and Other Victorian Devils
Challenges to the second law began soon after it was discovered. The first, most enduring, and most edifying of these is James Clark Maxwell’s celebrated demon. Here we only sketch the many lives and reported deaths of this clever gedanken heat fairy, since an adequate treatment would fill an entire volume by itself. A superb discussion and anthology is presented by Leff and Rex [1].

Maxwell’s demon was born with a letter from Maxwell to Peter Guthrie Tait in 1867. Maxwell’s intention was "to pick a hole" in the second law by imagining a process whereby molecules could be processed on an individual basis so as to engineer microscopically a temperature gradient. Maxwell writes:

. . . Let him [demon] first observe the molecules in [compartment] A and when he sees one coming the square of whose velocity is less than the mean sq. vel. of the molecules in B let him open the hole and let it go into B. Next let him watch for a molecule of [compartment] B, the square of whose velocity is greater than the mean sq. vel. in A, and when it comes to the hole let him draw the slide and let it go into A, keeping the slide shut for all other molecules...

Maxwell’s original description is both clear and historically important so we quote more extensively from his book [2]. One of the best established facts in thermodynamics is that it is impossible in a system enclosed in an envelope which permits neither change of volume nor passage of heat, and in which both the temperature and the pressure are everywhere the same, to produce any inequality of temperature or of pressure without the expenditure of work.

This is the second law of thermodynamics, and it is undoubtedly true as long as we can deal with bodies only in mass, and have no power of perceiving or handling the separate molecules of which they are made up. But if we conceive a being whose faculties are so sharpened that he can follow every molecule in its course, such a being whose attributes are still as essentially finite as our own, would be able to do what is at present impossible to us.

For we have seen that the molecules in a vesselful of air at uniform temperature are moving with velocities by no means uniform, though the mean velocity of any great number of them, arbitrarily selected, is almost exactly uniform. Now let us suppose that such a vessel is divided into two portions, A and B, by a division in which there is a small hole, and that a being, who can see the individual molecules, opens and closes this hole, so as to allow only the swifter molecules to pass from A to B, and only the slower ones to pass from B to A.