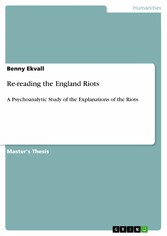 Master's Thesis from the year 2013 in the subject Psychology - Social Psychology, grade: B, Lund University, course: Political Psychology & Psychoanalytic Theory, language: English, abstract: The explanations of what caused the England riots in 2011 are many. Numerous commentators, politicians and reports tried to make sense of the four days in August 2011 that caused widespread disorder in London and other cities. Although there are both insightful and some less insightful descriptions of its causes, the problem this study identifies and addresses is the absence of a politicisation of the riots. Whilst the study asks how the explanations function in order to appear apolitical, the task of examining this is undertaken with psychoanalytic theory. In order to conduct such a study the ideas of Slavoj ?i?ek are drawn upon to develop a theoretical framework and method. Herein the explanations pointing out criminality, moral decline, dysfunctional families and inequality as the causes are analysed to show what must be suppressed in order to steer the causes away from politics.