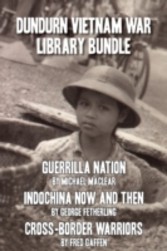 The Vietnam War was a regional conflict that turned into an epic confrontation between ideologies, leaving deep scars on the psyches of nations that fought and long-lasting physical damage to Vietnam itself. The three books in this bundle cover different aspects of the war and the region, from Michael Maclear's personal memories as an embedded journalist in North Vietnam to George Fetherling's observations of the state of Southeast Asia today to military historian Fred Gaffen's analysis of the experiences of soldiers travelling to faraway lands to fight in their countries' wars. IncludesCross-Border WarriorsGuerrilla NationIndochina Now and Then