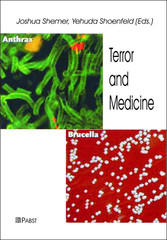 The Epidemiologic Pyramid of Bioterrorism (M. Huerta1, A. Leventhal)(p. 70-71)

Bioterrorism preparedness appears squarely on today's global agenda. World attention in general, and specifically that of health professionals, is now directed towards "mythological diseases" such as anthrax, plague and smallpox, which have been out of the mainstream spotlight for some decades. The scope of coverage by the mass media and the high levels of public anxiety that accompanied the 2001 anthrax crisis in the United States, and the current smallpox vaccination campaigns in the U.S. and Israel, reflect prevailing concerns over the potential global dissemination of these diseases. The sudden world panic about ancient diseases historically well known to practitioners of public health is perplexing. Modern public health is, in essence, rooted in the prevention of diseases such as smallpox and plague, and much of what we now know about epidemic intervention and disease prevention, including environmental measures, quarantine and vaccination, we learned over history through our experience in dealing with these very diseases. As early as the 12th century, ships arriving in the Republic of Venice from the plague-infected Levant were required to sit at anchor for 40 days before landing, in an effort to protect coastal cities from plague epidemics (the Latin root quadraginta, meaning "40," is the source of the modern term "quarantine") [1,2]. By the 17th century, port towns in the American colonies had enacted laws forbidding people with smallpox to enter port [3]. In the late 1800s federal legislation was passed in the United States which established the Division of Quarantine, the agency with oversight of quarantine activities that would merge with today's Centers for Disease Control and Prevention (CDC) some 100 years later [4].

If these diseases are historically well known to the public health sector, and if experience in preventing their spread has been amassed over time, why are we so surprised by the sudden reality of their existence?

When contemplating an infectious disease system, epidemiologists classically refer to the epidemiologic triangle [Figure 1]. According to this model, disease is the product of a unique interaction between the human host, the infectious agent, the environment in which the host's exposure to the agent takes place, and the vector that brokers this exposure [5]. Changes in any one of the apices of this triangle can affect the characteristics of the disease system as a whole. Such disease-altering modifications can be either naturally occurring or man-made. During the 20th century, for example, pandemics of influenza occurred in 1918, 1957 and 1968 [6,7]. These pandemics were associated with major antigenic changes in the influenza virus itself, which harbored a combination of animal and human viral genes [7,8]. This represents a naturally occurring change in the "agent" apex of the epidemiologic triangle. Contrary to this mechanism, some changes to the balance of the epidemiologic triangle may be induced by man. For example, forced isolation of infectious persons during an epidemic of a communicable disease alters the forces of the epidemiologic triangle by artificially severing the connection between agent and host. When we consider the diseases currently thought to be the most likely to be encountered in the context of a bioterror attack - namely anthrax, smallpox and plague (anthrax, of course, is no longer a threat but a fact) - it becomes apparent that changes have occurred over time in all three apices of the epidemiologic triangle, leaving today's population at an unprecedentedly high level of risk for disease. The alteration of checks and balances within the epidemiologic triangle has the potential to drive each disease system towards a new equilibrium, one with which we are not familiar and have not experienced in the past.